Spring has sprung, which brings a smile to many faces. For those in the outdoor-living industry, it’s the best time of year: Consumers increase their spending on casual furniture, grills, and outdoor accessories. For baseball fans like me, this is a glorious time, as Major League Baseball (MLB) makes its annual return.

Given the profusion of exciting products attracting customers’ attention (combined with increased consumer spending and a stronger economy), I am confident that this will be a winning season for specialty retailers in the outdoor-living industry. I wish that I could be as confident about my Chicago Cubs’ bid for a 2015 playoff spot, despite the team’s new manager, new pitching ace, and renovated stadium.

Why would anyone be loyal to a team with a 107-year World Series drought? Being a Cubs fan is akin to being a middle-aged woman searching for a soul mate on Match.com. She endures countless dates at wine bars and Starbucks, and ultimately, she might never find Mr. Right. I admit that after five decades of rooting for the Cubs, I’ve experienced my share of frustration and heartbreak. Being a Cubs fan, however, has never really been about winning. Like the middle-aged woman who learns to live without her prince, I’m OK supporting a team that might never secure a World Series title.

For me, being a Cubs fan has always been about my connection to the Cubs through my family and friends, as well as through memories of rooting for them, especially as a child and young adult. I loved those sun-drenched afternoons in the bleachers of the Friendly Confines, sitting alongside my dad and cheering on our lovable losers. In 1980, I even moved to Wrigleyville, just blocks away from Wrigley Field, in order to attend more games. 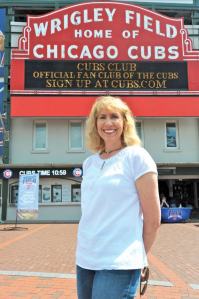 The start of this year’s baseball season has made me more reflective than usual because of the recent death of Ernest (Ernie) Banks (1931–2015), the Cubs’ legendary shortstop and eternal optimist, who is remembered fondly for his mantra, “It’s a beautiful day for a ball game: Let’s play two!” Banks embodied the true spirit of what it means to be a Cubs fan. Each spring, Banks predicted a pennant for the Cubs, who had not won a World Series since 1908 or a National League title since 1945. He was nicknamed Mr. Sunshine due to his positive and personable nature, long before his other nickname—Mr. Cub—stuck.

Banks’ infectious smile, good-natured sense of humor, and enthusiasm were traits that fans and fellow players witnessed both on and off the field. About 20 years ago, I was thrilled to meet him at a charity golf tournament. When I told him that I was frequently at the games in the 1960s and 1970s, cheering him on as he joined the MLB’s 500 home run club, he thanked me profusely for being such a loyal fan, even though the team was unable to get into the playoffs. I’ll never forget the warm, heartfelt smile that accompanied his words.

Many people I know have their own Ernie Banks stories. In the early 1990s, Patio & Hearth Products Report’s publisher, Tony Ramos, was standing in line at a health-food store in Marina del Rey, California, when a man standing behind him asked, “How are you doing, young man?” Just after Ramos replied, the man began singing “White Christmas” in a loud baritone voice. Afterward, he nodded, smiled widely, and wished everyone in the store a merry Christmas. Ramos learned from the cashier that the man was Banks.

According to Malcolm Gladwell, author of “Blink: The Power of Thinking Without Thinking” (Little, Brown and Company, 2005) and other best-selling books, first impressions occur instantaneously (or within two seconds). A genuine smile—combined with a friendly hello—is retailers’ best strategy for ensuring that customers make purchases at their stores, instead of at competitors’ stores down the street. It’s amazing to see how many retailers show indifference when potential paying customers walk into their stores. Surveys have shown that this lack of interest is one of the biggest reasons that people don’t return to a business.

Banks’ ability to connect with people serves as a model for those in retail environments who want to stand out and be memorable to customers. It doesn’t cost anything to acknowledge and smile at customers, even if those customers don’t purchase anything on one occasion; they might return, and they might recommend the store to others. By being welcoming, friendly, and helpful within those first two seconds of a customer’s visit, you are planting the seeds of a long-term business relationship.

Carol Daus is the editor of Patio & Hearth Products Report. She can be reached at cdauswrite@socal.rr.com